Our newest film, The Apple Pushers, is now screening at special events in select cities - and Kathleen Merrigan, the Deputy Secretary of the USDA, recently hosted a fabulous screening at the MPAA in Washington DC. In addition, the trailer went up on the splash page of itunes last week.

For dates and locations of events, please check out www.applepushers.com. And please feel free to "like" our facebook page as well.

Many thanks to the twitters and bloggers who are writing about the film!
Posted by Mary Mazzio at 2:26 PM 26 comments: 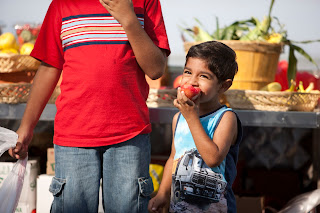 We have been working on a new film, THE APPLE PUSHERS, for the past year, which delves into the lives and stories of several immigrant street cart vendors who are, from dawn to dusk, pushing fresh produce into low income neighborhoods in New York City - where, like urban and rural neighborhoods all over America, finding a ripe red apple is a serious challenge.

The project came about after meeting Laurie Tisch, a prominent philanthropist (and co-owner of the Giants) in Aspen when we first screened our prior film, TEN9EIGHT.  After the screening, Laurie asked me if I would be interested in coming to New York to learn more about what the City was doing to combat the devastating rates of obesity, which were disproportionately affecting inner city neighborhoods. I drove through some of these "food deserts" - the South Bronx, Harlem, Bed-Sty - and although I didn't expect to see places to buy healthy foods, I was struck by the number of fast food joints crammed on city blocks... that were everywhere.  No apples - but plenty of burgers and fries and shakes.  At low cost.

Fast forward 18 months and the result of this collaboration is The Apple Pushers, a 72 minute film, narrated by Edward Norton and underwritten by the Laurie M. Tisch Illumination Fund; written and directed by yours truly; produced by me, Tom Scott (founder - Nantucket Nectars), and Christine Vachon (Academy-award winning producer - Mildred Pierce, Boys Don't Cry, Far from Heaven); and Laurie Tisch as executive producer.  The project had a special screening at the Aspen Ideas Festival this past summer with the likes of Robin Schepper (Executive Director of Michelle Obama's "Let's Move" initiative), speaking after the film. 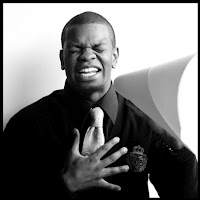 I had an epiphany yesterday. Rahfeal Gordon, who appears in TEN9EIGHT, and who recently graduated from Montclair University, has started his own inspirational speaking tour and book publishing business - aimed at people just like himself. Young people from low-income communities who have travelled his path, who have felt his pain. And who, like Rahfeal, aspire to greatness.

Rahfeal found out a month ago that TEN9EIGHT was to screen at Harvard. He called me up and asked if he could say a few words at the screening. Fast forward to yesterday. Not only was he invited to speak and to have dinner with faculty and members of the Schlesinger Library at Harvard - but he rented 14 passenger mini-van and brought with him an entourage. A remarkable entourage. High school and college students from the inner city who, like Rahfeal, were determined to make something of their lives.

They arrived at our offices, dressed in their Sunday best - and one of the young women said "We're on the Babson Campus. And later we're going to Harvard. Rahfeal has changed our lives. We've made it."

What I had never realized was that sometimes simple geography can make an enormous difference in the life and world view of what might be possible for an inner-city teenager. I hadn't thought that just stepping foot on a beautiful campus - Babson College, Harvard University - could be so empowering.

Rahfeal knew this. And he brought others with him to feel empowered and inspired. And motivated. 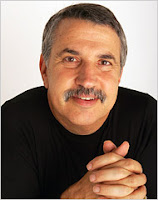 Today, influential columnist and thought leader, Tom Friedman, called on President Obama, in the wake of the Massachusetts Senatorial election, to refocus on the economy and to stimulate innovation and entrepreneurship.

He said this about our newest film, TEN9EIGHT: "In November, a documentary movie — “Ten9Eight” — was released that tracked a dozen students all the way through to the finals of the NFTE competition. Obama should arrange for this movie to be shown in every classroom in America. It is the most inspirational, heartwarming film you will ever see. You can obtain details about it at www.ten9eight.com."

Friedman also called for the president to put NFTE (the Network for Teaching Entrepreneurship) in every low-income community. For his full article: http://www.nytimes.com/2010/01/24/opinion/24friedman.html

TEN9EIGHT - the update with AMC Theaters

Since August, when I last posted an update, we had been talking to several theatrical and broadcast distributors, including Sony Picture Classics (and yes, it is true - I stuck to Tom Bernard like a cheap suit.) He had his people watch the film and consider... watch and consider... and watch and consider once again. When it became apparent that we were not going to be picked up by Sony, it was time to saddle up the rolodex.

A friend then introduced me to Bob Lenihan, AMC's head of programming. Bob watched the film. Called me back a day later. Fast forward to last Thursday when AMC opened the film in 8 cities (in an upscale theater and an urban location in nearly every city). The first wave of screenings were free - open to teachers and students - which were jammed. I saw firsthand the reaction of the kids in New York's Lincoln Square AMC. I stepped in about 3/4 of the way thru - worried that they would be jostling and texting and talking and fidgeting... and there was complete silence. I heard reports that throughout the country, the kids at these screenings clapped and cheered - and that reaction, my friends, has been our most powerful and important review of this film. Because we made it for them.

Our official theatrical release began on Friday, with Russell Simmons (DefJam) and Larry Wilmore (correspondent from the Daily Show) joining us for a packed red carpet event in New York. Last night in Washington DC, Deputy Secretary of Commerce, Dennis Hightower, AMC CEO Gerry Lopez (who flew in from Kansas City to be with us), Chris Gardner (profiled in The Pursuit of Happyness), and Joe Saunders introduced the film at a special screening at the Smithsonian.

As many of you know, we wrapped up post-production on our newest film, TEN9EIGHT (www.1098.com) earlier this summer. We had the good fortune to be invited to screen a sneak peek at the ASPEN IDEAS FESTIVAL, which is where US Supreme Court justices and Administration officials and captains of industry mingle and brainstorm. (They could also, incidentally, be seen walking around in shorts.) A shout out to Kitty Boone who helped insure that the screening was a stunning success in Aspen.

Our friends at PLUM TV not only promoted the screening, which was sold out - but arranged for me to interview a few of Aspen's glitterati attending the Ideas Festival, including the Daily Show's Black Senior Correspondent, Larry Wilmore. Click here for his very funny interview. (Note to self: never wear an unflattering white tee shirt on television.)

But it was Rodney Walker who stole the show in Aspen - everyone wanted to shake his hand - and I was so proud when he stood up to the microphone in an open session with US Secretary of Education, Arne Duncan, to ask a question about how the Secretary intended to get parents more involved in their children's education. Arne Duncan, for his part, made it clear that he is doing his job for the Rodneys of this nation. To see Arne Duncan's introduction to the film, check this out.

We also had another sneak peek recently with an audience of students - and one comment left me humbled and touched. "I am so glad I saw this movie," said a 16 year old inner city student. "I am going to become a Queen, a Diva... people are gonna know my name." And the fact that a single student felt more optimistic about her future and her ability after seeing the film - well - that was the whole point of making this movie. (Stay tuned - the film will be released in November during Global Entrepreneurship Week).

The film chronicles the stories of several inner city kids, as they compete in and prepare for a nationwide business plan competition (hosted by the Network for Teaching Entrepreneurship), and I am indebted to the Templeton Foundation for providing major funding for this project, and to the Kauffman Foundation, for their funding and support. I am also indebted to Steve Mariotti and my other friends at NFTE, who allowed me unprecedented access to these students and to the program itself.

I also feel so fortunate to have a new set of teenage friends - those who graciously agreed to let me interview them and prod them (and their families) about their lives and experiences - and people who are so full of opportunity and exuberance. They leave me Facebook messages and text me. And what struck me profoundly throughout the process of making this film is this fact: There are millions of kids just like Rodney and Mac and Jessica and Jamal - in every state, in every city. All of whom are seeds. Seeds with the potential for an explosion of color and vibrancy.

All they need is just a little bit of water.
Posted by Mary Mazzio at 9:49 AM No comments:

The eight rowed the 1500 meter course - fast and furiously in their boat, named DAISY'S HEROES, a reference to A Hero for Daisy, which was christened a couple of years ago by none other than the real Daisy. Capturing yet another piece of hardware to bring back to Todelo, St. Ursula's Crew is grinning in the photo above with coach Neil McElroy.

However, a special moment occurred moments after their win. Krysten French, a 12th grader, was the coxswain of this boat all season. However, a SRAA rule change concerning age prevented Krysten from competing - and rather than wallow in self-pity, she graciously handed the tiller over to junior Taylor McCollum, cheering and shouting herself hoarse for her team.

In an extraordinary gesture after the race, Taylor handed her championship gold medal over to her friend, Krysten French - - an act of remarkable generosity, compassion, and sportsmanship.

A true hero for Daisy.