The Closing of the Games

With the closing ceremonies to be broadcast tonight, withdrawal symptoms will set in for about a week or so. Workouts will be slightly more vigorous, at least, well maybe, for a month.

China has hosted a spectacular Olympics - the Opening Ceremonies were among the most artistic and spellbinding since Barcelona in 1992. (And I am not being biased because I was there to see those Games, but because the archer from Spain ran past all the athletes and then raised his bow and arrow and hit the cauldron, square on, igniting the Olympic flame.)

The athletes and the host country with its zillion volunteers sweated, jumped, ran, and did their very best. This can not be said for some members of the media corps. At the swimming venue, where the not-from-our-planet Michael Phelps (and his mother) were omnipresent. Phelps was, in a word, awesome. Rowdy Gains did an excellent job of commentating, but his co-host was less impressive with comments about which female swimmers were dating who and which swimmer's nude photos appeared on the internet. It was surprising that the official commentators transformed NBC's usual strong coverage into the PEOPLE Magazine version of the Olympic Games.

There was also media commentary on a male swimmer or two - such as who Michael Phelps might be dating, which was a strange and desperate attempt for 15 minutes of fame by swimmer Amanda Beard, clearly trying to become a reality show celebrity. She appeared on E or Access Hollywood as a correspondent (with questions to Phelps such as "where are you going to party tonight"). When asked by the Access Hollywood host "are you dating Michael Phelps," Beard replied, "I'll never tell." She later was pressed to explain this and, in a very diplomatic fashion said: "dating Michael Phelps? Eewwww."

The press also lambasted the track and field program, which, in fact, had a very strong medal haul this year, compared to prior Olympics - just not in the signature sprinting events, like the 4 x 100 relay where both the men's and women's teams were disqualified for dropping the stick. Even though the relay will most likely never change, getting rid of the baton and having a system like the swimmers (one hits the line and the other goes) would be much more exciting. Dropped batons are no fun for the athlete or the spectator.

And of course, there was the 2am coverage of rowing, which is the least covered event at the Olympic Games (possibly followed by canoe/kayak; handball; and table-tennis. OK - and maybe rhythmic gymnastics.) The Chinese women's quadruple sculls won the gold - and their technique was effective and strong. Good for Igor Grinko, the Russian at the helm of China's rowing program. US single sculler, Michele Guerette came within inches of a gold medal in the women's single, making us all proud. The US women's eight won the gold and the men's eight won a bronze medal - and Yazzie Faruq's commentating for NBC was terrific (and enthusiastic). She outclassed the field.

Sadly, it was clear that despite talented athletes (the Winklevoss twins making the final in the men's pair, the determined men's single, as well as the other many boats competing for the US at the Olympics), the US is seriously in need of a systematic development system, properly funded, for all its boats (and not simply the eights, which are now the least competitive event at the Olympics with barely more than a handful of entries). Australia, Canada, and New Zealand (the tiniest of populations) are fielding competitive rowing boats and developing athletes - so this skill and ability is not restricted to the communist countries.

Finally -unlike rowing, there was lots of coverage for beach volleyball players Misty May and Kerri Walsh, both of whom are strong aggressive athletes. However, the post-gold medal match display of hugs in the sand reminded me of the jello wrestling pits of the 1980s. I need go no further with this, except to say: what is up with the rule that the women can't wear anything other than those unbecoming bikini style outfits?

And where was the media commentary on this? (And of the fact that the men in the sport can not remove their shirts.) I am sure it is a Budweiser-mandated rule - but if Misty May and Kerri Walsh are to be truly iconic, they could put on real workout shorts that keep out the sand, and, a la Billie Jean King, say: "go ahead, fire me."

Then they would be true role models.

Well - it is only two years from now, when the Bode Millers will rise again from the ashes.

Can't wait.
Posted by Mary Mazzio at 1:39 PM No comments:

The Chinese women, in the women's quadruple sculls, blew away the field in their opening heat. They looked sharp and classically trained by Igor Grinko - - with the same technique that he tried to teach us back in 1992. Technique that is perfect for quad rowing - cutting off the finish and jumping off the foot stretchers.

It suddenly occurred to me that rowing is the perfect sport for a communist country (as is synchronized diving) because there can be no ego, every movement has to be identical with the person in front of you, there can be no individual star or extraneous movement. You have to completely blend in and if you are headstrong and try to do your own thing, you will only slow down the boat.

Countries are still questioning whether the Chinese are using performance enhancements - but if you look at their actual technique, the Chinese are rowing really well. That, plus the development of athletes that China began several years ago, has and will continue to yield strong results. Moreover, the extraordinary support from the Chinese government, which put the time and energy and coaching into their athletes, will pay rich dividends this summer.

Watching the US athletes compete, it struck me that many of these athletes are left to their own devices with little or no consistent coaching - and it is such a shame that the US does not have a similar system of support for its athletes (at least not its rowing athletes). With one of the largest gene pools of athletic talent in the US, more consistent support, money, coaching and facilities for up and coming athletes would result in more consistent results.

We in the US put most of our eggs in the men's and women's eights basket. However, only 7 women's eights are lining up in Bejing and only 8 men's eights lined up - - that is not much of a competition. Frankly, and this might be heresy - but removing the eights from the Olympic program because it is so sparsely attended - and instead adding more events for smaller boats (a lightweight single; a women's four, a men's and women's coxed four; more lightweight events) would be more exciting and more competitive. Plus - more countries can afford to send smaller boats to race.

Watching the rowing events at the Olympics this year is particularly exciting with the addition of the overhead cable cameras in the last 250 meters of the race. The Chinese broadcast is magnificent. In fact, you can actually see who is exerting intensity of effort (and who is not).

A shout out to the perennial Ted Nash, a member of the 1960 Olympic Team and coach to many Olympic and National Team boats. Ted coached the Winklevoss twins who advanced to the semi-finals yesterday, winning their repecharge heat. Ted is a coach who has always been available to almost any athlete that has picked up the phone to ask for his help. Kudos as well to Michelle Guerette, the US single sculler, for winning her quarter final - she looks really smooth and strong. And a great effort as well by the US men's single, Ken Jurkowski, who qualified for the semi-finals.

Finally - many thanks to Lela and the Business Pundit for this little bit of COVERAGE.

Posted by Mary Mazzio at 8:15 AM No comments: 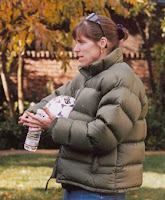 In celebration of 8.8.08 (notwithstanding the fact that our favorite event, rowing, is yet again relegated to 2am in the morning), both Forbes.com and Inc.com ran stories about Olympians-turned-Entrepreneurs.

Thanks so much to Forbes.com writer Maureen Farrell for including me in Forbes.com's all-star line up, along with this photo of me (looking uncharacteristically bossy. Not.)

Thanks also to Inc.com's Tamara Schweitzer for including me in Inc.com's Olympic - themed coverage.

In other news, we are knee-deep in production on our newest documentary film - and are set to corral about 40 kids in New York next week, which is making my line producer's hair nearly fall out.

Hope everyone is having a good summer.
Posted by Mary Mazzio at 9:01 PM 1 comment: